Networking is the absolute most effective method for finding jobs for ex felons. As we discussed in our previous article on how others are finding jobs for ex felons HERE, between 40% and 80% of all jobs are filled through networking. Furthermore, that 40-80% of jobs filled from networking contains most of the most desired positions. The best positions are filled well before they need to be advertised outside of the company! As someone with a felony conviction, networking is even more important than for those with clean records.

Many people think that networking during a job search means calling everyone you know and asking them for a job. They associate networking with being pushy, overbearing, and bothering their friends. People often shy away from networking because they don’t want to be labeled as this type of person. This is not how networking should be done if you wish to be successful finding jobs for ex felons!

Ex cons who are successful networkers show a sincere interest in their networking contacts. They work hard to develop a relationship, establish their credibility, and share information. Finding jobs for ex felons is not easy if you approach your networking selfishly. Networking should be as mutually beneficial as possible. You may not be able to provide any value right away to someone you are talking to but always be on the lookout for those opportunities. Many people just like helping other people out so don’t go overboard trying to repay someone all at once if there isn’t an immediate opportunity to do so.

It can take some time to build a solid network so don’t be discouraged if you don’t see immediate results, although you might. Finding jobs for ex felons doesn’t usually happen overnight.

The Guide To Finding Jobs For Ex Felons Through Networking

What is a “network” and “networking”?

The word “network” sounds pretty official and businesslike, but it really just means an informally connected group of people. This can mean friends, family, colleagues, former teachers, former cellmates, other felons you met in prison, volunteers from programs you attended, people from church, and anyone else who you have some kind of relationship with. You’re networking every time you get together with someone for coffee, every time you chat with someone while you’re getting a haircut, and every time you bump into an old friend on the street. In short, networking simply means building and maintaining relationships – any of which may connect you with helpful information about a job.

This definition of networking sounds like the same thing as ordinary socializing – and in one sense, that’s actually true. Networking isn’t so much a different activity as it is a different way of thinking about your social connections. When you’re in need of a job, instead of thinking, “I don’t know anyone who’d want to hire me,” the concept of a network gives you the ability to say, “I have access to a whole network of people, any of whom might have information that could lead to my next job.” Networking is taking specific actions to increase the size and quality of your network of connections. The bigger and better your network is the easier finding jobs for ex felons is.

Why should I network?

Using networking to become comfortable talking and listening in a professional manner is often overlooked. After years or decades spent in prison it isn’t always an easy transition into the working world. Using networking to become comfortable talking with professionals will make your eventual job interviews much easier. It will also give you an opportunity to make mistakes in a setting with few consequences.

Who should I network with?

Below are just a few groups that you should network with to ensure they know you are interested in a job:

That is a very short list to get you started. Do not be afraid or ashamed about telling people you are looking for work. Finding jobs for felons is hard enough without being shy. Going straight after prison is not an easy task and you should be proud that you are working hard to go down that path. Anyone who would tease you or make fun of you for trying to better your life is not worth listening to.

Where should I network?

If you have read this far it shouldn’t surprise you when I say EVERYWHERE! Obviously you will have to use some judgement here. You don’t want to be talking to people about job openings at a funeral but most other situations are fair game!

Once you get started building your network you will be amazed by how connected everyone is. You never know who someone you meet at church or in line at the store might be or who they might know. When you are taking on a difficult task like finding jobs for ex felons you can’t afford to miss any opportunities.

The internet is also a fantastic place to network. There are several great networking sites like LinkedIn.com that are great for finding people who work for companies you are interested in or in the industry you want to work for. You should also search for discussion forums or groups that are for the industry you are targeting or help with the process of finding jobs for ex felons. We will be publishing additional articles about these resources in the future.

How do I network?

I have great news. You have been networking your entire life without even knowing it! You have spent the past several months or years in prison practically networking all day.

Networking while finding jobs for ex felons is usually just having a nice conversation with someone. You will get to know them a little, ask them a few questions, and let them know you are looking for a job. They may or may not be able to help you but at the end of the conversation you are both better off for it.

Below are eight rules to follow for ex felons when networking: Don’t ask for a job, ask for information

Networking is not about asking everyone you know for a job. As a matter of fact, when you network while finding jobs for ex felons you should never ask someone for a job — you ask them for information that will help you in your search. Your goal is to build a relationship and establish rapport so that if a potential opportunity becomes available in the future, they will want to refer you.

There are exceptions to this of course. If you are talking to someone and they mention having a position open you should follow up with them immediately on best to apply. Otherwise you want to leave your networking contact with a good impression of your and the knowledge that you are looking for a job. People are busy. You don’t want to trap someone in a conversation and take up a lot of their time.Nothing scares people more than the prospect of someone eating up a lot of their time. If you have an unscheduled discussion with someone try to keep it fairly brief and positive. Make sure they are enjoying the conversation and try not to focus solely on your job hunt if you are in a social situation (party, BBQ, church lunch, etc.)

If you are having a scheduled discussion with someone like a lunch meeting or coffee chat have an agenda and keep the meeting on track. Nothing scares people more than the prospect of someone eating up a lot of their time. Many people don’t want to cram yet another meeting into their already jam-packed day. Walk into your networking meetings prepared with a mental agenda that includes:

By planning your meeting ahead of time, you establish your professionalism, gain credibility, and cover all the critical agenda items. Let the other person speak

When you network it is important that you do not do all the talking. If you have asked another person for advice, make sure they have the opportunity to offer it. Also, when you do all the talking, the other person might feel confused and unsure of what they are supposed to do with the information you have supplied. Here are some questions you can ask to keep your exchange balanced and establish rapport. Ask for suggestions on how to expand your network

One of the main goals of networking is to tap into the network of the people you are meeting with. Each person you meet knows hundres of other people, some of whom may be able to help you. If you can gain introductions to some of them, you quickly increase your network and your chances of finding the right connection.

Ask your contacts if they can recommend a professional organization or the names of some other people you should be talking to. Write down what you learn about them

You need to keep track of who you have met and the details of your conversation. As you meet more and more people it becomes increasingly difficult to keep track of everything in your head.

If you take the time to write down the key points of your conversation it will make future interactions with that person much easier. If you want to establish rapport with another person, you need to create ways to keep the relationship going. Ask for their card or email address and ask the person if you may keep them informed of your search progress. If you read an article that pertains to a discussion you had at a networking meeting, cut it out and send it to them with a brief note. Try to find at least two to three opportunities per year to reconnect with members of your network. Find ways to give back

Building a network is about creating a genuine relationship. Thank your contact for the information they have supplied and see if you can help them in some way.

Maybe your contact is interested in living in an area that you are familiar with or has a child interested in attending the same school you just graduated from. Share your knowledge of the school and your experience there as a way to help the other person.

Keep notes on what you learn about your contacts so that future correspondence can have a personalized touch, such as, “How was Jane’s first year of school?” Send a thank you letter

Always thank your contacts in person and follow up with at least an email. This is a great way to show a little appreciation and acts as a good reminder to them that you two spoke and that you are looking for a job.

Finding jobs for ex felons is a continuous process, even with networking. If you are persistent and professional you will see results from networking. Even after you find your first job the network you build will continue to help you throughout your life.

Check out our Jobs for Felons page for a great list of companies we have contacted about hiring felons. We provide a lot of useful information for those interested in finding jobs for ex felons. 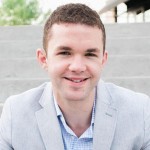 Adam Sanders has worked as a reentry advisor, program leader, and teacher at San Quentin State prison in San Quentin California for several years. He co-founded San Quentin's financial literacy program and is passionate about helping former offenders successfully re-enter society and find personal and financial success. Adam also has nearly a decade of experience working in Marketing and Finance for large software companies and an MBA from Northwestern University.